Attack of the Show Twilight Spoof

In addition to Felicia Day appearing on Jimmy Fallon, Carlton tipped me off to her interview on Wired.com

And for another random Felicia Day moment...

I stumbled across The Phoenix Requiem, and between the story and art chewed through 400+ pages in one sitting. I strongly recommend it.

Joss Whedon's run on Astonishing X-Men is being turned into an animated online comic book. The problem is that the original art wasn't meant for animation, so if you are expecting something akin to an animated tv show, you will be disappointed. The animation is clunky.

And despite the quality writing, I'm not a fan of some of the things Whedon did during his run. He did them well... but not everyone is going to like it.

Check out the preview on Io9 here.

After I made a comment on Bard of Valiant, a gaming blog, mentioning my a la carte home-brew, the author of the blog asked if I would be willing to do a guest post regarding how I went about making the a la carte system.

The resulting article is here. Sure, I could just repost it here, but I thought since she was nice enough to ask me to guest-blog I could at least send all five of you to look at her site.

In echoes of Wal-Mart, online content suppliers Apple and Amazon have become too important to the studios for them not to do business, but Apple and Amazon run on such thin margins they are taking a big slice out of conventional DVD sales, which are much more lucrative to the studios. You can read more details here.


The question is now can the studios recover from their own short-sightedness and failure to put together a profitable online business model? Will they cut prices on DVDs (and Blu-Ray) to try to prop up sales? Or will they do something most of Wal-Mart's suppliers are afraid to do and play hardball? My uneducated guess would be a little of both... push the content providers for a little more margin, because if the studios cut off the providers people will likely go and rent or buy movies the old fashion way, while cutting the MSRP on movies a bit (and roll out the back stock very heavily discounted) to try to reduce sales erosion.

Give Matt Knetzger a medal. The 54-year-old tackled and took down a punk bank robber. The best part, it looks like while Mr. Knetzger is holding down the loser, Mrs. Knetzger gives the punk a kick for good measure. Read more here.


Ok, I wish I had watched just for that.

Darwin too controversial for US?

Are we becoming a country of morons? The movie Creation can't get a distributor in the US because of the "controversial" nature of the subject matter, namely Charles Darwin and his penning "The Origin of Species".


Good grief, why must faith and reason be exclusive for so many?

One of the stories that made the rounds this week was that of a student who killed a burglar, using a samurai sword to drop the intruder.

I'm sure there are people saying that the burglar didn't deserve to die and that the student should be charged. I'm not one of them. I think they should give the kid a frakkin' medal. No expensive trial, no feeding and housing the criminal until he gets turned back loose on society, the taxpayer wins. Samurai swords ftw indeed.

You can check out articles here and here.

A couple of videos for those curious about the upcoming Star Wars MMO, The Old Republic.

The first is about Imperial Spies and the Mandalorians, check it out here.

The next one gives us a peek at Coruscant as well as some additional in-game footage. You can se it here.

I would embed these, but their embed code is acting wonky, so I'll have to settle for links. 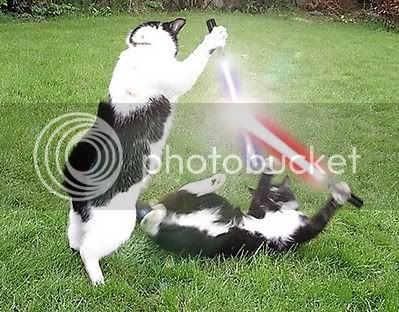 I case there was any doubt that Fox is the ass-hat of networks, they are now looking at making a sci-fi western that is *NOT* Firefly. Check out the article while I research tv network voodoo dolls.

China Could Have the World By Its Rare-Earth Balls

After putting its competitors out of business, China is the sole supplier for a wide range of rare earth minerals used in high tech devices. Now it is contemplating plans to cut off other countries.

Why does this remind me of Wal-Mart?

PAX (Penny Arcade Expo) is one of those events, like Comic-Con, I'd like to go to "someday". They have things that GenCon doesn't. But this year one of those things was the Hini (H1N1 - I call it Hini, rhymes with shiny) virus. I've scoffed at Hini, considering it a flu bug with good press coverage, but reading the Penny Arcade post detailing outbound planes and trains with passengers having confirmed cases makes me want to reach for the sanitizer.


I guess I'll have to count on my natural resilience to the flu and the fact that my environment has built up my immune system. Besides, do you really think I have sanitizer in this house?

The recession has been a boon for Wal-Mart. Shoppers pressed by the economy swallowed their standards and traded down while competitors already on shaky ground went under. Now Wal-Mart is rolling out an initiative to gun for other competitors it thinks it can kill off, Project Impact. Some of the stuff seems to be no brainers, like cleaner stores and friendlier staff. The big questions are can Wal-Mart afford to transform its massive store base, can it pay the new staff enough to stay friendly while maintaining razor-thin margins, and can it keep shoppers from leaving as the economy improves?

It reminds me of a scene from Demolition Man... "After the franchise wars, all restaurants were Taco Bells."

Shatner and Nimoy at DragonCon


To see all of the footage, check out the post at Io9.