There's been some research on the origins of domestic cats and several articles the past couple of days. I found this article especially interesting, probably because it sounds "right".


After all, do you think we could have domesticated cats if they didn't let us?

Only if you get creative with the product labels at their self check-out. You can read the actual story here.

I wonder how much they (and other retailers) get ripped off for through these self check-outs? I know where I work toyed with the idea, but it appears they quickly learned the folly of it. What good does it do ti say $7 an hour on a cashier if you lose hundreds of dollars in product?


My mom dislikes these because they put people out of work. I like them at my grocery store because I can bag things the way I want.

You play by the rules. You follow tradition. You encourage structure.

You insist that EVERYBODY do EVERYTHING by the book. Seriously, is there even an ounce of imagination in that little brain of yours? I mean, what's the point of imagination, right? It has no practical value...

As far as you're concerned, abstract theories can go screw themselves. You just want the facts, all the facts and nothing but the facts.

Oh. And you're a perfectionist. About everything. You know that the previous sentence was gramattically incorrect and that "gramattically" was spelt wrong. Your financial records are correct to 25 decimal places and your bedroom is in pristine condition. In fact, you even don't sleep on your bed anymore for fear that you might crease the sheets.

Thankfully, you don't have anyone else to share the bed with, because you're uncomfortable expressing affection and emotion to others. Too bad.

If you want to learn more about your personality type in a slightly less negative way, check out this.

The other personality types are as follows...

Anyone that has been in my house knows this is a crock of shite. I am by no means a perfectionist. I have a friend who is somewhat OCD, I am the opposite... AED (Apathetic Entropic Disorder).

My friend Sherri sent me this.

It's a blog entry regarding a Browncoat astronaut taking Firefly and Serenity DVDs to the International Space Station.


Reminds me of a line out of Firefly...
Wash - That sounds like something out of science fiction.
Zoe - Honey, you live on a spaceship.
Wash - So?

How geek are you?

And who is surprised? Got this one from Nicole.


Some of these I've seen in other videos.

This video showcases some cutting edge image programs and what can be done with them. One of the examples they show is using the photos on Flickr to create an image model of Notre Dame cathedral.


This reminds me of the time I walked around Stonehenge, using an entire roll of film to snap a 360 degree view of the monument. Except this is cool 3D stuff. And not in a box somewhere in one of my closets.

At least top 10 according to this guy.


No Chewbacca? No Millennium Falcon? Even the Jawas rate better than the two NPCs from the prequel.

And while I think the lightsabers are the coolest sound, I'd say Darth Vader's breathing is the most recognizable, even among non-geeks.


I never knew skunks made good pets. I'd worry about them wrecking everything in the house then gnawing on my jugular while I slept. But it looks domesticated... and a better housekeeper than me.

This news has been all over the place today. I wonder how much Sony had to pay for this? And I wonder if Netflix will get bribed by the other (HD-DVD) camp?


Obviously Sony is trying to avoid a repeat of Betamax, but can they do it and maintain their price point? Wal-Mart has already announced that they'll be selling a $199 HD-DVD player, which means the other big boys will follow suit. Plus, how many people that actually own either format use Blockbuster?

Wal-Mart's "back to school" condoms

Given Wal-Mart's conservative track record, my guess is that someone is losing their job over this.

Which is too bad, because it's genius.

Especially in light of my Home Depot post, I found this bloggingstocks blog entry interesting. Now before you think this is another post of me hopping from one foot to the other gleefully cackling at Wal-Mart's misfortune, let me tell you my first thought when I read that article.

Wal-Mart did better than I would have expected.

Like many retailers, Wal-Mart is taking a more cavalier attitude towards shrink because paying for a decent loss prevention staff is expensive. They are more worried about getting sued by a shoplifter than stopping the theft. I'm sure the retail gangs love this, and it's another sign of the problem with our lawsuit-happy society. If you get hurt committing a crime, I say tough, you had it coming. In fact, I'd probably laugh if someone running out the door of a store with a tv got hit by truck.

But only a little. The tv might get broken.

Yay! I've been switching out some of my diet soda for diet tea (I drink a *lot* of diet soda) and added a couple of minutes to the treadmill at the gym. 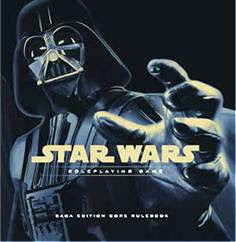 Wizards of the Coast finally released their latest update to the Star Wars Role-playing Game. We've been hearing that they were going to change the system some, but still keep it d20.

When Jason brought me my copy, there was one thing that I noticed right away. The book was square.

I actually thought that was going to mess with me more than it did, but I had to wonder, why the heck did they make it square? Surely this custom print set-up didn't help the cost of the book. I was also a little concerned because it seemed thinner than the previous edition.

It turns out that the new system is more compact. Things like prestige classes don't take up much space, stat blocks are simpler, and there was more meat per page overall.

WotC moved away from their Open License d20, probably for two reasons. One was because ever since they introduced the OGL (Open Gaming License), d20 companies have been popping up (and most failing) left and right. And a few have gotten more attention and acclaim than WotC. So now, this new iteration of the d20 system totally belongs to them.

The second... say "Open License" and "George Lucas" in the same sentence with a straight face.

While I haven't put the system in a live test yet, I have monkeyed around with character rules some. Overall, I think I like it, and I see ways to adapt the system to other settings. Adapting the Modern d20 system would be extremely easy, as SW: Saga d20 draws heavily on that framework (not that anyone else has used Modern d20 as the basis for a Star Wars game). Other elements that have appeared as alternate rules in Unearthed Arcana by WotC, and Green Ronin's True20 system.

Of course, I've already done my first tinkering. In the new system, a lot of skills have been condensed. For example, Spot, Search and Listen all fall under Perception. But they left Swim, Climb and Jump as individual skills. I am combining them under Athletics.

Once we see the game in action, I'm sure I'll have more opinions.

Toomey sent me this, a blogger's choices for the top 5 amateur lightsaber fight videos by "college" people (even though Lake Central is a high school).


One he left out, maybe because it didn't fall under "college", or just because he hadn't seen it was the classic Art of the Saber.

Another advance in quantum teleportation

I just mentally coined a new term: q-port, for quantum teleportation. You heard it here first. Anyways, scientists have increased the range at which they can quantum teleport (q-port) information to 143km. You can read more about it here.


And as much as a headache trying to puzzle out q-port will give you, don't even bother trying to wrap your head around the experiment where a photon hit a receptor something like a billionth of a second before the switch was thrown.

Well, they might as well have after this article. As much as I hate shoplifters I could never work at Home Depot. I don't even know why they bother paying for Loss Prevention personnel if they aren't supposed to stop thieves.


OK, there are still the internal thieves for LP to deal with, but with this news out there, unless Home Depot changes their stance retail gangs will take them to the cleaners.

Confessions of a Part-Time Sorceress 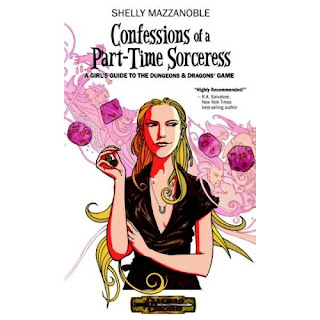 I have to admit that I was a little surprised when I saw this. Obviously, someone at WotC realized that if so many women are playing games like World of Warcraft, there is a larger potential market out there for female gamers that what we currently see represented in the hobby.

Granted, the disparity in the male-female population has improved over the years. I remember when female gamers where very rare, even at places like GenCon. The year Flaire went to GenCon with me (1990?) she said that she something to the effect of she had never been leered at so much in her life.

I was surprised to see some gamers railing against a book like this in the WotC forums. Then again, anti-social, non-hygienic male gamers are probably a large reason why there are fewer female gamers. There are probably some that would prefer to keep it a "guys only" club. Guys that reek of BO and dirty laundry.

Then again, maybe if more women come into the hobby, some of these guys will see the value in using soap and detergent.

It has been announced that Season 4 will be the last for Galactica. As much as I hate to see it end, it is better for it to end purposefully rather than find out it has been canceled as has 4 episodes to wrap up the story.

Also, there will be a two hour long "movie" dealing with the Battlestar Pegasus between the attack on the colonies and when it meets up with the Galactica.