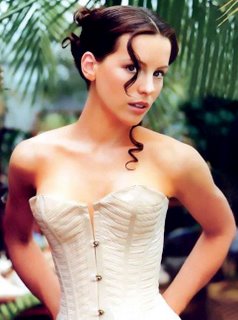 I was somewhat surprised to hear that Underworld was greenlit for a sequel. I don't remeber the movie being that much of a success, and it was pretty bad, even by my rather forgiving standards. While Kate Beckinsdale was great to look at, especially in skin tight vinyl and a leather corset, she couldn't pull off being a badass vampire warrior. All she did was strut around with her guns held at arms length.

I wasn't even going to bother with the sequel, even with the promises of more Kate in the same outfit and out of it as well (though the nudity was pretty much PG-13, side-on with strategic blocking... Ozling was disappointed as well). Then I read a review on IGN that was fairly favorable and decided to give it a shot.

It is much better than the original. It is faster paced, more action, and Kate is much more believable this time around. Maybe she trained more, maybe she's had more physical roles since the original but she didn't have the look of a model dressed up to play with guns like before.

That's not to say it's a great movie, but it is a decent action flick. Granted, it commits the same mistake almost every movie or tv show with a super-strong makes in ignoring mass, and there are some other story holes, and I like my ending much better, but it was fun to watch.

Yes, I know the picture isn't from the movie... I didn't have one handy and wanted to try the "insert picture" function which I had never used before. All this time I'd been using Hello to post the picture then going back and editting the post around it.