Buy me another round! 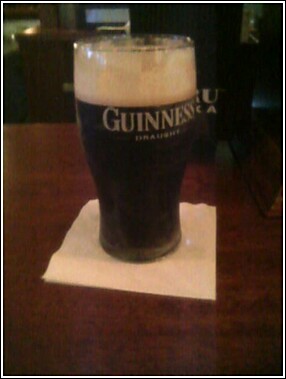 On a whim, I decided to go to Fionn MacCool's Irish Pub to have a few pints and watch Highland Reign, a local Celtic pub band. Since my usual partners in crime were unavailable for various reasons and it was too short notice for my larger circle of friends, I was on my own. Not as much fun as with friends, but the alternative was stay home and play on the computer all night.

The crowd was much smaller than the last time I was at MacCool's, and if not for a large birthday party then place would have been over half empty. The band was okay, but they were working in a new fiddler, so it sounded a tad rough.

I had two strokes of good fortune. One was that the bartender forgot one of my pints for 10 - 15 minutes so she didn't charge me for it. The other was that a regular bought everyone at the bar a round, and I happened to be sitting at the bar. He did the same thing last time I was there a few months ago, also on a Saturday. I'll have to remember this. The only thing better than a cold pint of Guinness is a free cold pint of Guinness.

This looks suspiciously like the picture with which you taunted me. Mean. E-vile.

I've been told that having an evil twin would be redundant. :)